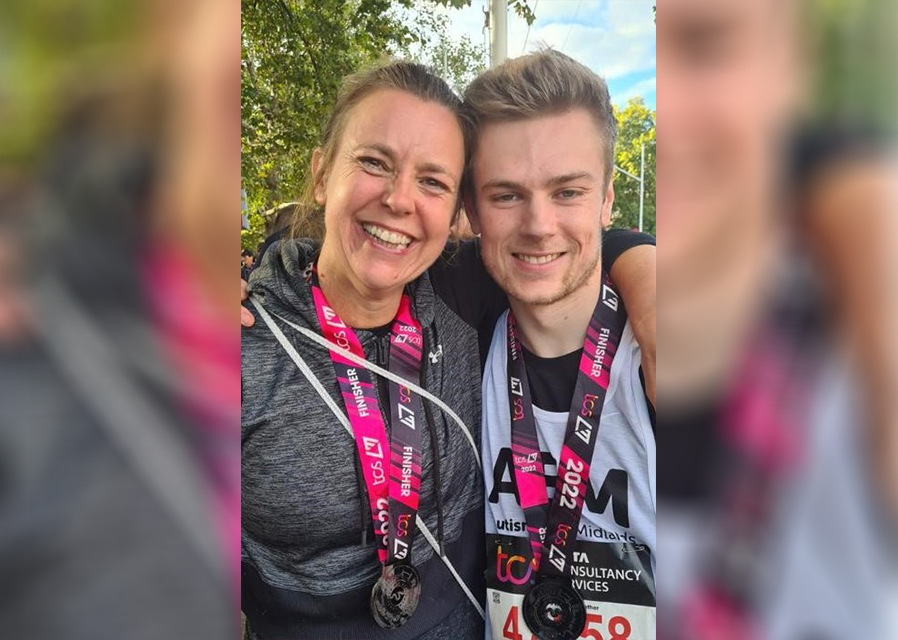 Fulfilling a dream to complete the iconic London Marathon was Autism East Midlands Director of Corporate Services, Carole Botham, who took on the challenge whilst also raising funds for AEM. Also taking part in the Marathon to raise money for the charity were Dan Kneller (who works at AEM’s IT provider Addooco), Becca Peel, Shoaib Awan, Luke Longley, and Ross Levy.
“It was an amazing experience,” said Carole. “We were buoyed on by the crowds who supported us along the route. I hit my most challenging section between the 22- and 24 mile-mark, but the crowds kept me going and I couldn’t stop at this point; walking was not an option! Passing landmarks like Big Ben and Buckingham Palace was very emotional and when I reached the sign that said ‘400 metres to the end’ it was such a powerful feeling. I was thrilled to complete it within my target at 4hr 58m and I am so glad I did it; I could not stop smiling, nor crying.”

The money raised through sponsorship will go towards supporting autistic people across the East Midlands. Carole added: “By raising money for Autism East Midlands I hope that I’ll be giving something back and going some way to help those who need support.”

Luke Longley, who found himself facing a major challenge when halfway round an ankle injury flared up. Even so he managed to power on and finished in 4hr 44m. While he has previously completed ultra-marathons on different terrains, he hadn’t been a fan of road running before. Racing along the city streets was a departure from his normal runs across countryside, fells and hillsides.

“This has to be the hardest run I’ve done – both mentally and physically. However, raising money for AEM is what kept me going. Whilst my pace drifted from where I wanted it to be, placing myself in an uncomfortable setting of a road run is nothing compared to how my daughter and many others with autism must feel on a daily basis. Five hours of hardship for me, in that sense, is nothing compared to that.”