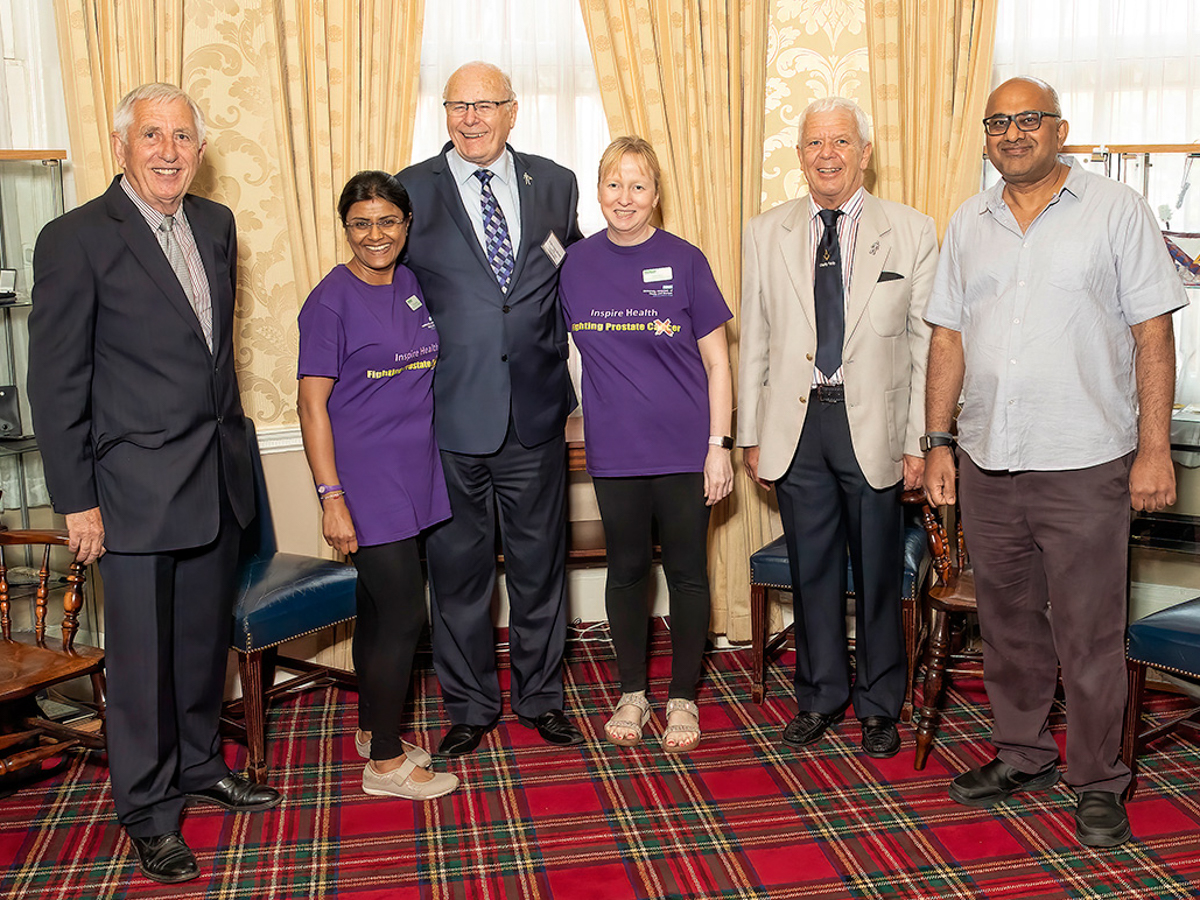 The fourth and final session of the provincial prostate cancer screening programme was accomplished at Worksop Masonic Hall on Saturday 27th June. The head of the Urology Department at Burton on Trent Hospital, Miss Jyoti Shah, and her team undertook the testing ably supported by the Provincial Almoners, namely: W. Bro Urban Burrows, the Provincial Grand Almoner; W. Bros Keith Hollingworth; David Snowden; Ron Nuthall; and Paul Freeman.
The idea for a Nottinghamshire testing programme was born early in 2017 when Freemasons from the Provincial Grand Lodge of Nottinghamshire — Urban Burrows, on a visit to London, heard that a province was considering prostate cancer screening for its Brethren. Picking up on their initiative, Urban made enquiries, subsequent to which the Graham Fulford Trust was contacted. The Trust, on payment of a fixed fee per examination, would carry out a PSA blood test; however, the team had discovered information indicating that a blood test was not 100% conclusive. Further enquiries identified that Miss Jyoti Shah and her team performed the same blood test plus an internal examination of the prostate gland — a far more dependable check.

As Miss Shah was in the process of planning a prostate cancer screening campaign for the Province of Derbyshire (as part of her remit for a nationwide screening service) the Derbyshire Almoner, W. Bro George Frost, was contacted and the Nottinghamshire Almoner’s team were invited to attended sessions at Derby and Burton. After discussion, Urban and the team realised that it was a feasible scheme for Nottinghamshire, so a proposal was put to their PGM who immediately embraced the proposal and gave the team the go-ahead with his blessing.

A fundraising campaign was launched to cover the cost of the examinations; such was the reaction that not only were the cost of 400 examinations covered (the original number of requests from Brethren wishing to undertake the test) but also sufficient funds to make a donation to Miss Shah’s prostate cancer research programme and to both the Derbyshire and Nottinghamshire branches of Blood Bikes who would support the programme.

The four two-day screening sessions took place in Masonic centres across the province: West Bridgford; Nottingham; Mansfield; and finally, Worksop. In order to allow Miss Shah to concentrate on the medical aspects of the sessions, the Almoners’ team, supported by two of very willing helpers, undertook all the planning. This approach maximised the number of examinations performed per session, more in fact than the original expectations. Thank you must go to all the Masonic centres and their staff, for making rooms available and for providing refreshments free of charge.
Of the 400 Masons examined, 10% have had a follow-up examination, of which four individuals have started treatment. Four lives have been saved, that’s a massive outcome for the campaign. All examinees were asked, by an Almoner present, if they would care to make a donation to the overall campaign fund — to a man they complied!
Grateful thanks for their donations go to the Provincial Charity Committee, Lodges, Other Orders and Units, local Regalia Stores, together with a number of individuals. The Hall Companies for the use of their facilities, and of course the 400 examinees for their generosity.

The province’s success has been proven and our knowledge will be shared — three other provinces have already asked the Nottinghamshire Almoners’ team to give them guidance on how to effect a similar campaign. Hopefully, because of this campaign, more individuals have been made aware of this disease, its symptoms and what to do. Miss Shah expresses the hope that more men will be happy to talk openly about prostate cancer to their spouses and other men.