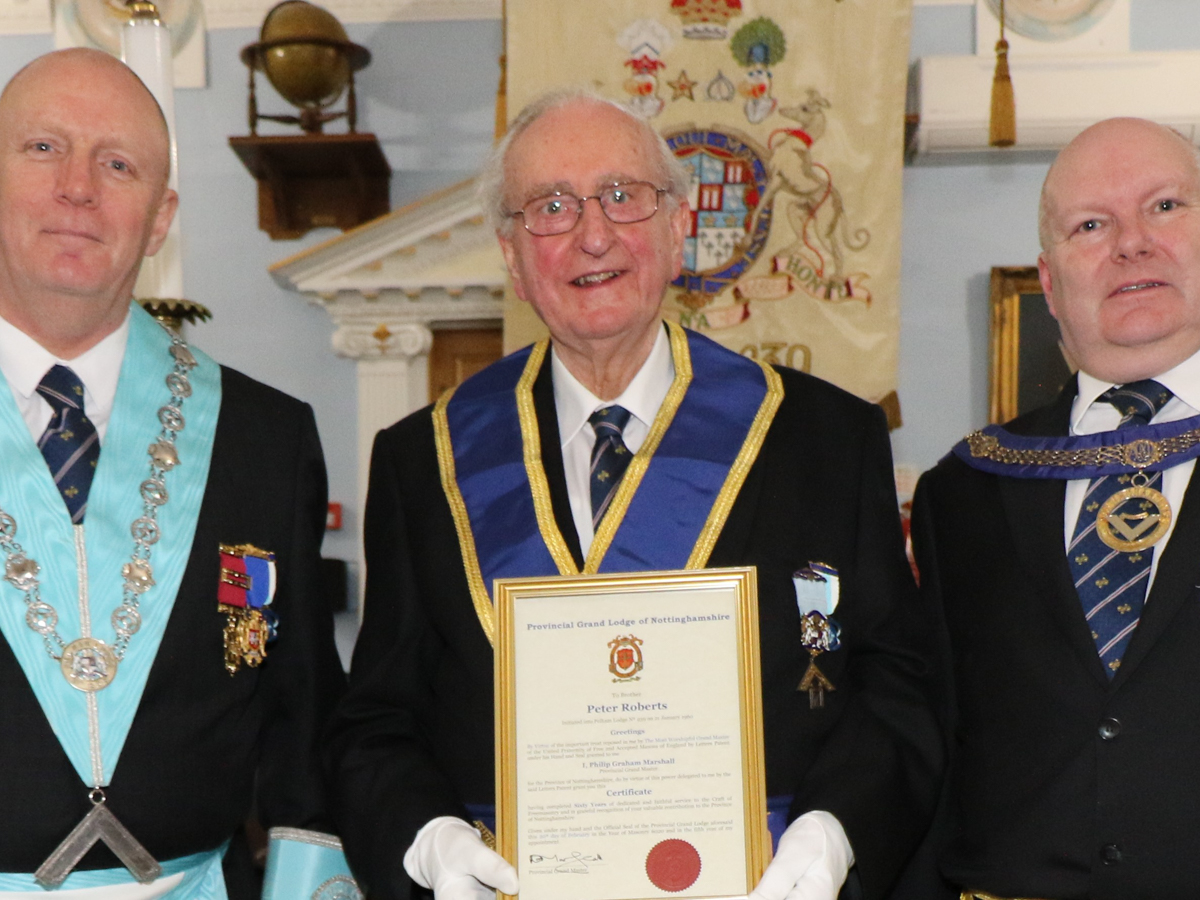 60 years of service to Freemasonry

Local man Peter Roberts has been awarded a 60 Year Certificate for his services to Freemasonry. Peter was born into a Creswell farming family on 10th December 1931. The family was, amongst many other things, involved in the breeding of shire horses, about which he is very knowledgeable. He served for many years as treasurer of the UK Shire Horse Society and in this capacity he was honoured to meet members of the royal family at county shows.

He has been married to Aileen for over 60 years (Aileen is the daughter of Eric Wycherley a Past Master of Pelham Lodge and was the local pharmacist) and they have two sons, James and Martin, both of whom have very successful careers. He has two grandchildren, Gregory and Ben, and one great granddaughter.

A Chartered Accountant by profession, Peter had a very successful career culminating in holding the important position of Finance Director of Steetley plc during a major period of its development as one of the most prominent building materials companies in Europe. When, in 1986, Steetley plc moved its headquarters from Gateford Hill, Worksop to Rugby, Warwickshire he moved and settled there.

When he retired in the early nineties, he became more involved in the life of the town through his involvement in local freemasonry there and as a very active Rotarian. In addition, he has been a prominent member of his local church.
As far as his freemasonry is concerned, he was initiated into Pelham Lodge No 939 on 21st January 1960. The Worshipful Master on that evening was prominent Worksop mason Alan Johnson. Peter became Worshipful Master of Pelham Lodge in 1971. His predecessor was Lot Williams who provided Peter with great support during the year.
He was rewarded for his contribution to the lodge and freemasonry in general with appointment to Past Provincial Rank in Nottinghamshire in 1978 with a further promotion to the rank of Past Provincial Grand Sword Bearer in 2008.
As mentioned earlier, he moved to Rugby in 1986 and became a joining member of Composite Lodge in 1987 and was also honoured by the Province of Warwickshire with appointment in 2018.