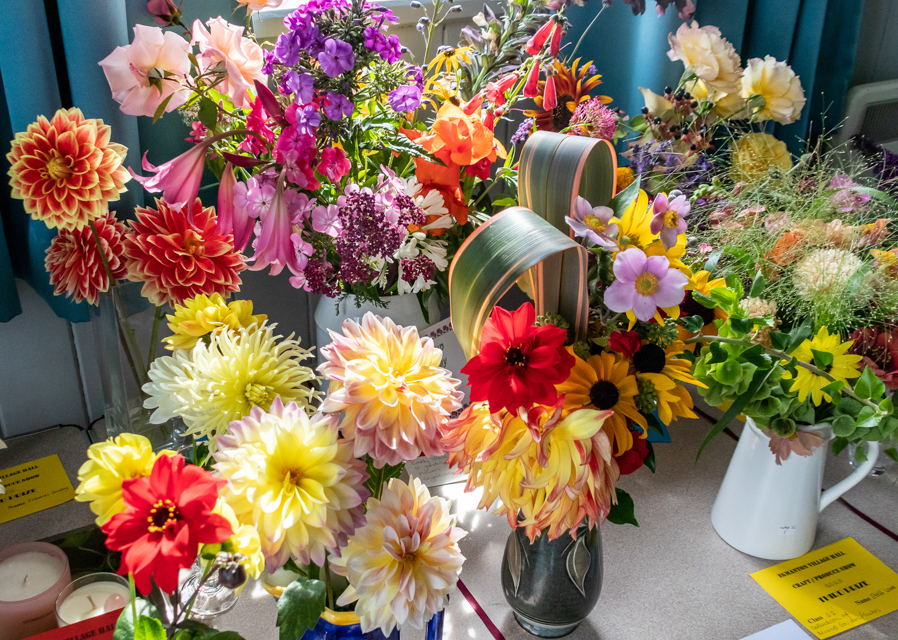 After a three year (Covid-enforced) absence, the popular Craft and Produce Show returned to Egmanton Village Hall. Amidst fears that the hot, dry weather conditions would have affected entries, the organisers prepared for the event with optimism. This was amply rewarded with entries up by around 50 to almost 300, boosted by entries sent from all around the country. The friendly atmosphere and enthusiasm of the competitors arriving laden with entries was heart-warming. It was so rewarding to see new faces as well as familiar friends and, later, to read new names on the prize cards. It was a real community occasion.

The floral entries provided a riot of colour and excellent arrangements. These were viewed across a much-expanded photography table with a mass of high quality and well printed images to make the judge ponder.

Possibly the vegetable section showed the difficulties of the season, but long-term resident Peter Barber said he is now growing Mediterranean crops like melons and chillies, which would never previously have been possible. Despite their difficulties, local gardeners had managed to find some tasty looking entries their classes – and the longest weed was no smaller than usual!

As always, the crafters had been busy and produced a variety of great entries. Alison Barber’s exceptional coat deservedly won the ‘Best Craft in Show’. There were some innovative entries from the young children and some exceptionally well-made brick models. A last-minute decision split the class into best ‘freestyle’ build and best kit build. Congratulations to all the young people who entered and special thanks to the young twins who also helped behind the scenes. As always, the cooks delivered tempting cakes and bakes as well as a colourful array of jams and chutneys.

Many thanks to local Councillor, Sylvia Michael, who spent the afternoon at the Show and took a genuine interest in all the entries. She happily presented the prizes.

The winners of the children’s classes received cash prizes and the adult trophies were awarded as follows: