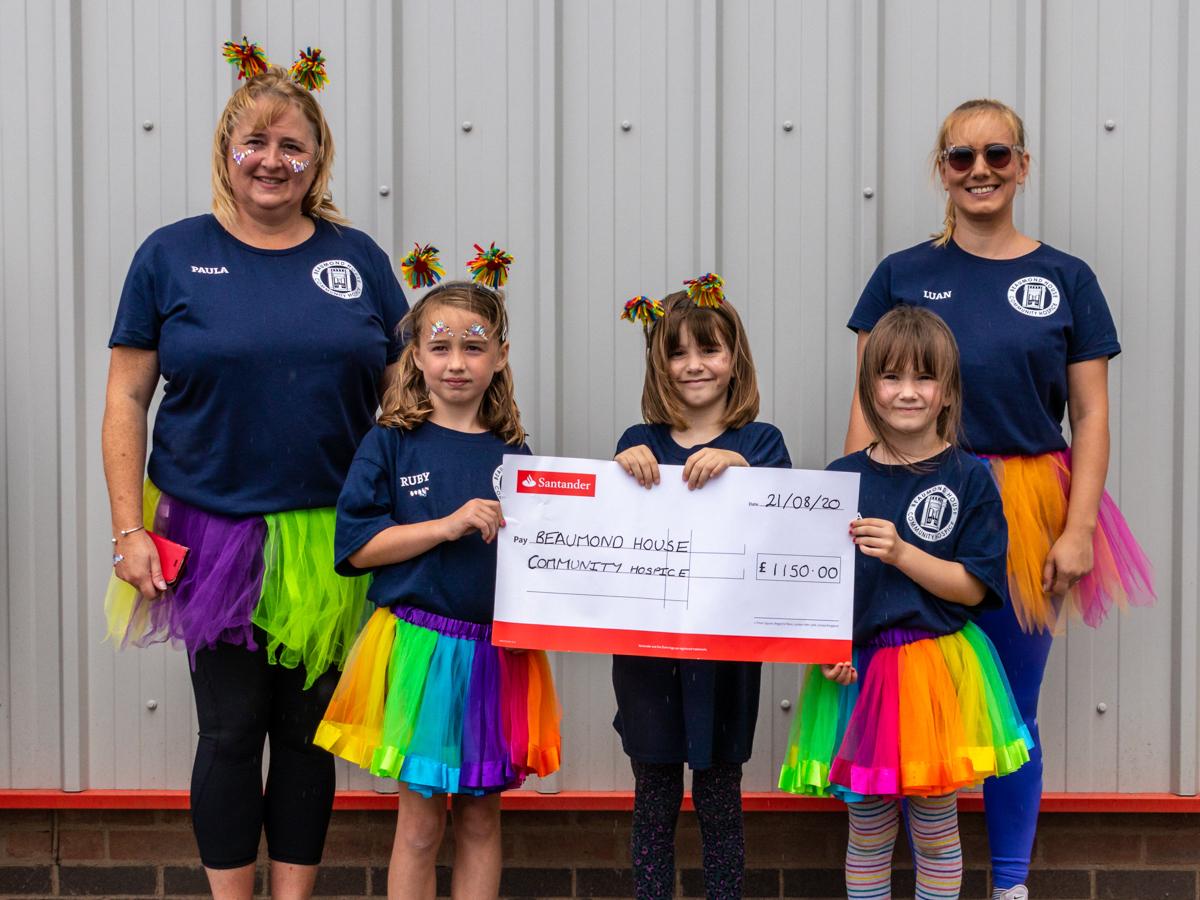 Three children, Ruby Doyle from Kneesall, Devon Henson and Isla Henson from Ollerton, successfully undertook a sponsored walk from the Hay Barn Café in Kneesall via Laxton and Egmanton to The Bird’s Nest Café at Hall Farm Granary in Weston on the morning of Friday 21st August. The girls, who met at school, were accompanied by their mothers, Paula Doyle and Luan Henson and a group of older friends and parents who had heard about their effort.
The idea sprang from a conversation between Ruby and her mother about the great fundraising achievement of the Nottinghamshire Young Farmers with their Scarecrow Challenge. The family scarecrow stood in Laxton and it set the duo wondering about how they could come up with a fundraising idea of their own. Thinking about their own regular walks during lockdown, it was a short step to thinking about a sponsored walk to Weston.

Ruby shared her idea with her friends and the children decided to spend their summer holidays working towards this fitness goal whilst raising some money for a worthy cause. They chose Beaumond House as it is a charity that is very close to their hearts and does some amazing work in our local community. The children are all from Kneesall Primary School and are aged six to eight. The effort is all the more outstanding because their age is about the same as the number of miles they aimed to cover.

They were not daunted, setting off from Kneesall at 9.30am in strong winds which had been forecast to reach 40mph. As far as possible they walked through the fields, tracks and paths to avoid the roads and they had a planned stop at The Dovecote Inn in Laxton, where publican Sam had drinks to refresh them. They then again took to the back ways to walk through to Egmanton and from there to a short stretch of the old A1 leading them to The Bird’s Nest Café at Weston, where they arrived in great spirits at their target time of 12.30pm. They were welcomed by proprietor Lesley Tindall with a balloon arch and applause from their waiting family and friends.

As they shared tales of the walk with those who had come to applaud them, more money was donated and the excited party were surprised to discover that their route had actually been a mile longer than they thought, measuring eight miles on the app used by Luan Henson to record it.

Sponsorship was collected through a JustGiving page and collecting boxes as well as a sponsorship form. Kat Wright from Beaumond House Hospice was there to welcome the party and to thank the children for their efforts. She accepted a cheque for £1,150, which was already out of date as people continued to give more money and continue to do so. The JustGiving page remains open (www.justgiving.com/fundraising/youngandbreathlesstoo) and the collecting box at the Bird’s Nest will be available for a while. The current total stands at over £1,700.

Organiser Paula Doyle said: “I am so proud of everybody. Once they had made up their minds to do the walk the girls were keen to get out on walks to prepare for the big effort. They had great fun and still had the energy to run up the drive to the finish. We were amazed to learn that the walk was even longer than we had thought and everyone is so grateful for all the sponsorship.”