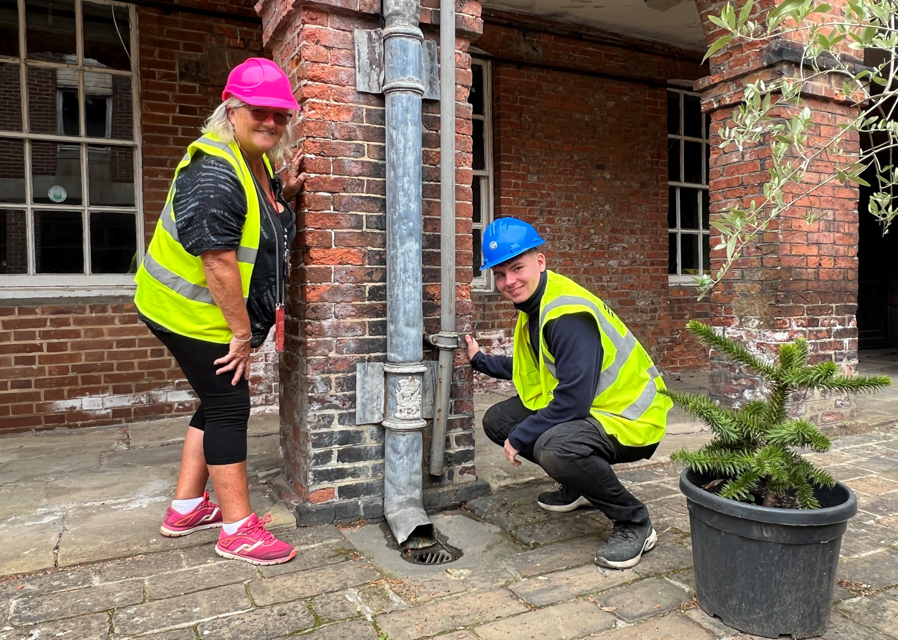 When Dan Nicholson set his heart on a heritage skills apprenticeship at Wentworth Woodhouse, the 18-year-old decided there was only one way to find out more about the buildings he could one day be repairing: he booked a place on a Black Diamonds Tour.

The tour was created by Catherine Bailey, author of the Black Diamonds book which brought international fame for the Grade I Listed stately home once owned by the Marquesses of Rockingham and the Earls of Fitzwilliam.

“I was amazed to hear the house’s story and find out about the people from its past. But all the way through the tour I was taking in all the workmanship and the condition of the rooms,” said Dan, of Herringthorpe.

Wentworth Woodhouse Preservation Trust was impressed by Dan’s keenness to learn and he became its first Heritage Skills Apprentice in May 2022.

His three-year training programme is being funded by two charitable trusts – the Radcliffe Trust, which supports the development of cultural heritage and craft skills, and the Leche Trust, a grant-awarding charity which supports the conservation of historic buildings and objects.

Dan, who recently completed a Diploma in Electrical Installation at Sheffield College, had seen the job advertised on the Government’s apprenticeships website.

“I was amazed at the variety of tasks in a heritage setting. Learning centuries-old skills which need to be preserved really appealed to me,” he said. “I was over the moon when I landed the role.”

Dan is learning about the huge demands of the entire site from Julie Readman, the Trust’s Facilities and Maintenance Manager, and is gaining additional knowledge alongside heritage tradesmen and contractors who come to work at the house.
He said: “I’m really enjoying everything. So far, my tasks have included weekly maintenance jobs, plus taking down electrical light fittings and switches for rooms being used as period film sets and shadowing a joiner carefully repairing Georgian doors.”

In August, Dan took part in the first summer school to be staged by the Hamish Ogston Foundation and Historic England.
The in-work heritage skills and apprenticeship scheme was launched with Historic England last year to tackle long-standing shortages in heritage skills such as carpentry, bricklaying and joinery, painting and decorating, plastering, roofing and stonemasonry.

Over five-weeks, Dan and other participants learned alongside experts from Historic England, and had the opportunity to carry out some repairs at two of the mansion’s iconic buildings, the Camellia House and the Ionic Temple, under the tuition of specialist heritage contractors.

Dan started a maintenance skills course in September and more courses will follow, giving him a strong foundation in heritage work.