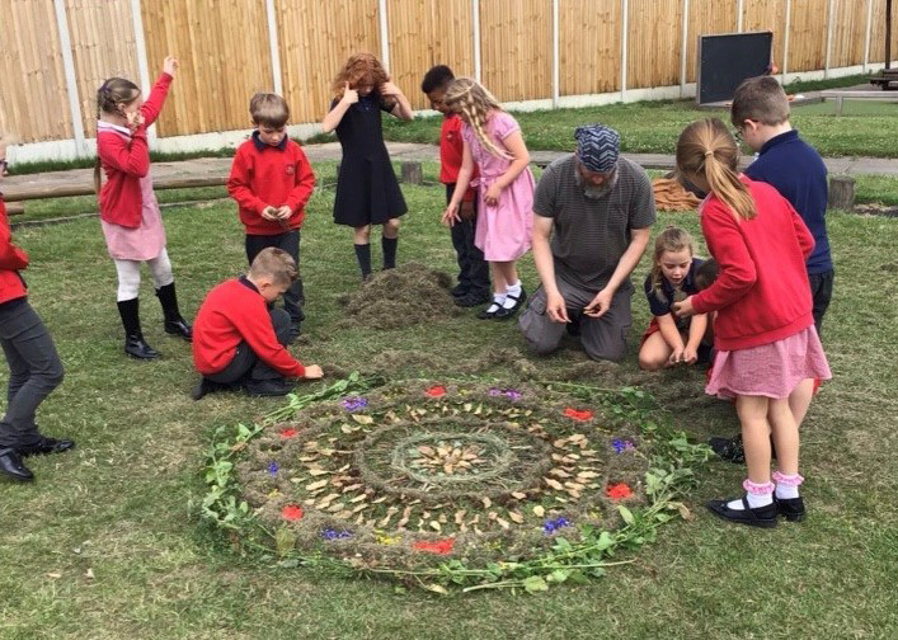 The Arts Society Dukeries have funded a full day with artist James Brunt for children at Hallcroft Infants School, Retford.
The children enjoyed outdoor workshops where the whole school worked together, first gathering natural materials from the land and then using them to form wonderful patterned works of art.
The society have received a video from the day, and thank you letters from the teachers and the children who took part.
The Arts Society Dukeries hold monthly lecture meetings, normally at the Carlton Civic Centre, Carlton in Lindrick, and, following their summer break, their next lecture is on Thursday 6th October. starting at 11.00am, it is entitled ‘Yorkshire’s Seaside Heritage’. The speaker is Mike Higginbottom.
The Yorkshire coast illustrates admirably how 19th century holiday resorts almost invariably owed their origin to the growth of the railway system, but depended for their success on the fickleness of public popularity. Scarborough began as a spa-town in the 17th century, lost some but not all of its gentility with the arrival of the railways, and alongside its popular amusements, boasts proudly of the writings of Sir Osbert Sitwell, the architecture of Cuthbert Brodrick, the paintings of Atkinson Grimshaw and, at the Church of St Martin-on-the-Hill, perhaps the most remarkable collection of Pre-Raphaelite ecclesiastical art in the north of England.
Whitby west cliff, harking back to Georgian days, Saltburn-by-the-Sea, epitomising Victorian order and grandeur, and what little there is at Ravenscar, planned in the 1890s, were all precipitated by the railway-extensions at different times in the 19th century, all characterised by considerable optimism and – as it turned out – pretension on the part of their sponsors, and none of them completed according to their initial design. Each of these sites, frozen in time by economic depression, financial miscalculation or both, provides an unusual insight into what was and what might have been.
Their next lecture is on Wednesday 3rd November and is ‘Faberge: the Romanov Sunset’ by Brian Healey, followed by a lecture on Wednesday 1st December on painting in the open air.
The society have always supported initiatives to protect, maintain and preserve ‘The Arts’ and our artistic heritage for the wider community and, in particular the younger generation, with young arts projects organised locally under their arts volunteering wing. Over the last few years, grants have been given to a number of schools and charities to develop a range of arts activities with primary aged children, to encourage creativity through art lessons.
For further details on the group please call their Chairman Suzanne on 01909 290488, or visit www.theartssociety.org/dukeries.