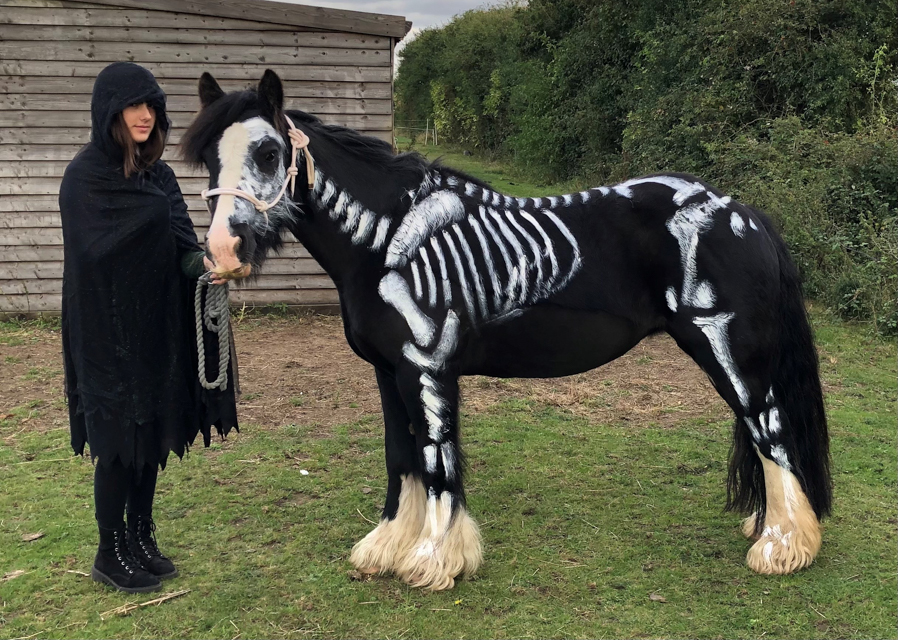 A pony, rescued from one of the worst cruelty cases Bransby Horses has ever seen, is settling into her new home.
Of the 27 horses taken in by the charity, Limpopo is one of the lucky ones. It took 18 months of veterinary care and rehabilitation to get the seven-year-old mare to a point where she could be rehomed and she is now living with a family who truly love her.

Bransby Horses’ Executive Director of External Welfare, Emma Carter said: “Thankfully Limpopo’s story has a happy ending, which was not possible for all. But, for all the animals we’ve helped, we will remember each and every one.
“It’s a hard realisation to think what would happen to these animals if our supporters were not behind us to tackle cruelty like this.”

Sadly, many of the 200 animals released at the time of Limpopo’s rescue either had to be put down or had such complex medical needs, they must remain in sanctuary care for the remainder of their lives.

In August this year a woman was found guilty of failing to meet the needs of 131 equines by failing to provide a suitable environment, a water supply, adequate nutrition, routine dental or farrier care, or adequate parasitic treatment or control and treatment for prevention of illness and disease.

She was also convicted of causing unnecessary suffering to a number of other horses, dogs and goats.

Bransby Horses worked alongside the RSPCA, World Horse Welfare, The Donkey Sanctuary, The Horse Trust and Redwings to rescue and rehabilitate those that could be saved.

Limpopo arrived at Bransby Horses along with 27 others in January 2019. She was scared and unused to humans, shaking in fear and trying to run away when approached.

As a result, Bransby Horses had to work gently and patiently to understand her health issues; she was underweight, her eyes were dull and she was so itchy, she had sores all over her body where she had bitten herself until she bled.

Despite her past interactions and understanding of humans leading to nothing but suffering, Limpopo had a very sweet and quiet nature from the start and it didn’t take long for her to become a firm favourite with the charity.

Limpopo lived on the charity’s Visitor Centre Yard where her handlers took her out for walks and gradually introduced elements such as pole work and lunging to help build up strength, fitness and manage her weight.

The team on Main Yard continued with a handling programme until she was considered suitable to join the charity’s Perfect Partner rehoming scheme. At that point, it didn’t take long for the beautiful and calm pony to find her Perfect Partner in the form of Bransby Horses’ supporter, Mel.

Limpopo has now joined Mel and her family who have spoilt her rotten ever since her arrival – giving her the love, care and attention she always deserved.

Mel said: “I approached Bransby Horses as my retired loan pony had to be put to sleep leaving my other pony, Emily, on her own.

“Having a pony that can’t be ridden has opened our eyes to lots of new and exciting activities that we hadn’t considered before.

“Limpopo is now one of the family and it warms our hearts when she calls to us as she sees us approaching. She’s even started whinnying when I open my shed door as she knows I am getting feeds ready.”

The charity’s work is only made possible thanks to kind donations Bransby Horses receive from the public.