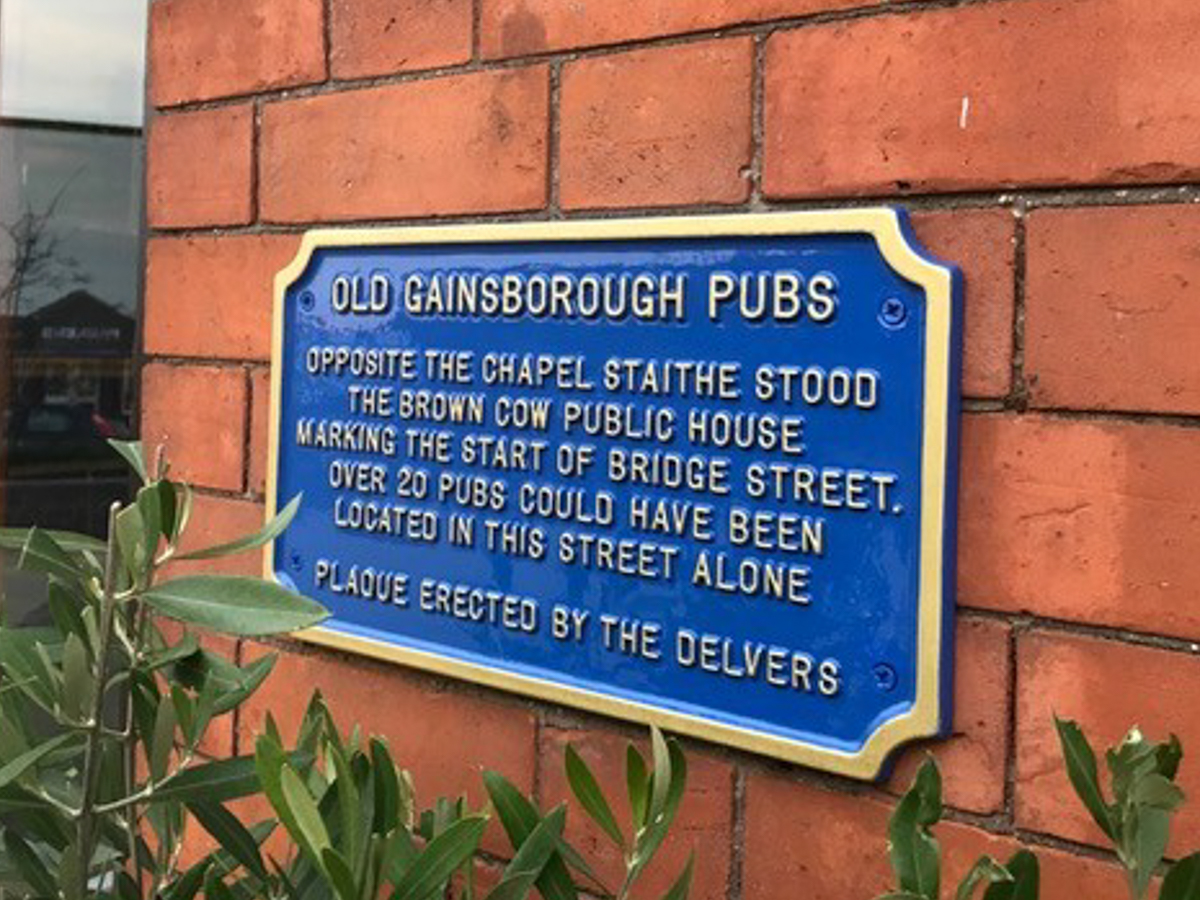 Before the the railways began to “double the speed and halve the tranquility of existence.” said Canon Moor, we should remember that there was very little activity at the new end of the town beyond the Southolme. Primarily, Gainsborough’s population were housed in the acres that started at the Northolme and ended at the Southolme, which together with Bridge Street, made up the metropolis that was Old Gainsborough.

It was not until late 1841, that construction started on a new church at the Southolme end of the town. The church was dedicated to the Holy Trinity and completed in 1844. This thoroughfare becoming known as Trinity Street. Beyond the Southolme, the new terraces that were to spring up in the second half of the century in Victorian Gainsborough did not exist. Today it is hard to imagine that at this time Trinity street led onto open fields, that beyond led to ‘the Prairie’, the only relevant building beyond being The Union Workhouse built in 1837. At the Southolme, what is today, Tesco supermarket, a farm with a pond and The Ivy Hall stood close by. The site of the Kings Bingo, originally the Royal Albert Hall and Opera House, was built on land known as Boyes’ Gardens. In this area was a bathing house or Spa, that was in public use until 1770. Moor comments “a ghastly crime had been committed near this spot, and the body of a murdered man was thrown into the bath.”

The ecclesiastical parish of Holy Trinity was formed from the civil parish of All Saints and consecrated in June 1843. The first two Vicars of Holy Trinity would see the birth and rise of Marshall’s and the arrival of the railways. The third Vicar was George Langton Hodgkinson. He was curate of Gainsborough from 1861 to 1862, and of East Retford from 1863 to 1867. In 1867 he returned to Gainsborough and became vicar of the Holy Trinity parish, a post he held until 1891. Hodgkinson was a keen sportsman, who played first-class cricket for Oxford University and Middlesex. He was also the founder of what would become Gainsborough Trinity Football Club.

From 1841 to 1901 Gainsborough experienced an economic boom. The population increased by over 144% with 90 deaths of cholera recorded in 1849 alone. With Marshall’s engineering works birth and expansion, the firm provided thousands of jobs with the prospect of improved housing. This sucked in labour from the surrounding villages and brought them into Gainsborough, at a time when other work had been unpredictable and often poorly paid. Marshalls’ enterprises created local wealth in other ways. As it levelled the land to expand its works, it harnessed the clay and fired Marshalls’ bricks. These bricks were then purchased by local entrepreneurs including Thompson & Fox, who by 1880 had become established builders and were developing the area we know today as Trinity Street.

Gainsborough was at a cross roads in its growth and development. Unknown at the time, was that the traditional river industries were going into steady decline. In Bridge Street you would not have guessed this was happening. Starting at The Brown Cow pub near Chapel Staithe, over 20 public houses could be located. Townsfolk were often split in their views against the participation and affects of alcohol. A large temperance movement had gathered pace in Gainsborough since 1830, where members ‘took the pledge’ to abstain, or even petitioned against the sale of alcohol. The Gainsborough temperance movement met in a disused Chapel in Little Church lane, but by 1870 had gained enough momentum to have their own purpose-built hall in Spital Terrace. At the same time, the Gainsborough Working Men’s Club had opened in Bridge Street. The club was started a few months before the building was complete.
The working classes were flexing their muscle with both purchasing power and influence and by 1872 The Gainsborough Co-Operative Society had formed, with the idea of giving back to their members the dividend that would otherwise be shared with the business owners. Working hours were long and conditions were hard but technological and medical improvements were improving slowly. Against this backdrop there was a rapid demand for entertainment and recreational activities.

Gainsborough Trinity Football Club was formed in 1873 as the Trinity Recreationists, set up by the vicar of the Holy Trinity Church for young parishioners. In 1889 they became members of the Midland Counties League, losing their first match 1-2 to Lincoln City and going on to finish seventh out of eleven clubs. The club quickly became well known, and won their first Midland League championship in 1890/91 and after finishing runners-up the following season were elected to the Football League Second Division. Their first match was against Newton Heath, who went bankrupt ten years later before reforming as Manchester United.

Born off Trinity Street in 1870, Fred Spiksley became a professional footballer at age 17 for Gainsborough Trinity. Scoring 131 goals for his home town club and becoming the first Gainsborough person to play for England. If this was all Fred Spiksley achieved in his lifetime it would be remarkable enough. Yet there is much more to this man’s fascinating life. Fred Spiksley is not widely remembered in his home town today — which is the motivation behind the campaign #spiksleyscominghome. The celebrations start at this year’s Gainsborough Beer Festival in October which will feature a guest ale to be christened “Spiksley 131” to celebrate his goals for Trinity. And on 17th November, with special guests from the world of football, the memory of Fred Spiksley will be honoured with a Delvers local history blue plaque in memory of this legendary player — welcoming him back home to the Northolme, Gainsborough.
Much more is planned, including a documentary style film which both football fans and local history enthusiasts will find of interest.